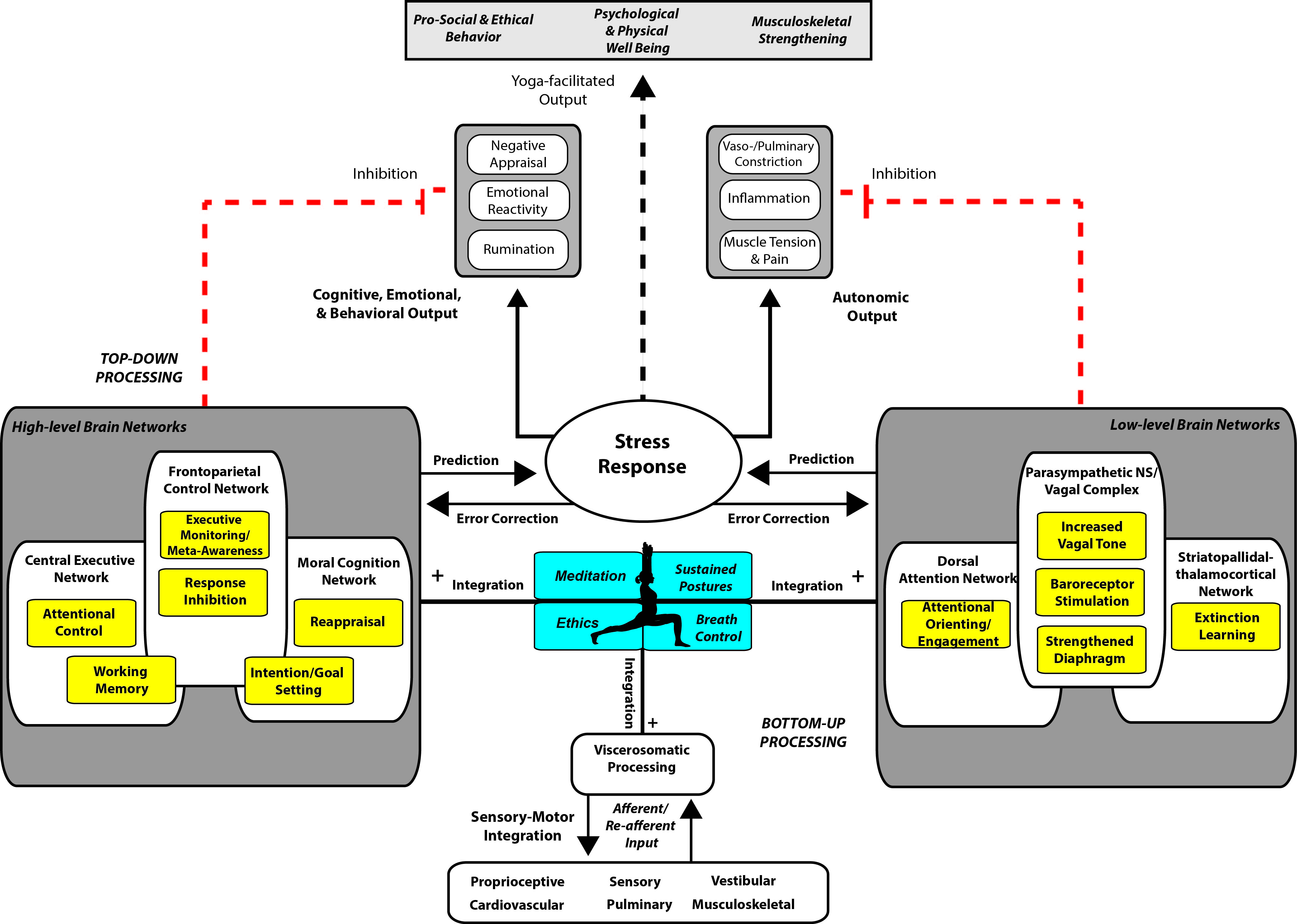 How does yoga work? Is there a benefit to doing a bunch of postures, breathing, and meditation techniques while being crammed in a room full of Lululemon Athletica? A group of interdisciplinary researchers gathered at Kripalu Yoga center to discuss the potential mechanisms associated with yoga practice in contemporary settings, while also acknowledging the traditional, historical framework of ethically-motivated practices.

The manuscript specifically poses a novel theoretical model of the potential self-regulatory mechanisms by which yoga facilitates adaptive reactions to physical and mental stress. 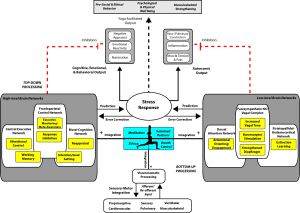 To give you a sense of what this model is depicting, I summarize below:

This systems network model includes the major limbs of yoga, represented as a skillset of four process tools: ethics, meditation, breath regulation, and sustained postures. As depicted in the model, cognitive, emotional, behavioral, and autonomic output in response to a stressor is modulated by a number of regulatory processes (yellow boxes) proposed to be influenced by the process tools (limbs of yoga, blue boxes). A stress response is often accompanied by cognitive, emotional, and behavioral output that includes emotional reactivity, negative appraisal, and rumination. In addition, autonomic output such as vasoconstriction, pain and/or tension, and inflammation often accompany maladaptive stress responses; (see solid black arrows). In chronic forms of such stress responses, negative, long-term consequences on health across bodily systems are often the result.

Our model proposes that yoga facilitates adaptive output (dotted lines), including long-term psychological and physical well-being, musculoskeletal strengthening, and prosocial behavior, through four primary factors in the context of stress: (1) an emphasis on interoception and bottom-up input, (2) more efficient bidirectional feedback and integration with top-down processes, (3) increased phasic inhibition (red lines) of maladaptive forms of emotional, cognitive, and behavioral output (e.g., reactivity, negative appraisal, rumination) as well as autonomic output (e.g., vaso- and pulmonary constriction, inflammation, and muscle tension/pain), and (4) perceptual inference rather than active inference for improved prediction and error correction processes. These four factors optimize self-regulation and improve the communication and flexibility by which top-down and bottom-up processes inform behavioral output in the context of physical and emotional stress. Through repeated yoga practice, there is a resulting skillful optimization of autonomic control in response to stressors on and off the yoga mat – keeping arousal at lower levels during stress-mediated challenge, maintaining positive appraisal and reinforcement, helping the practitioner stay relaxed with less effort, and facilitating rapid recovery of bodily systems under stress. A number of cognitive, emotional, behavioral, and autonomic mechanisms are proposed along with the underlying high- and low-level brain networks that support such mechanisms.

There are a number of methodological considerations that also must be taken into account when interpreting the existing data on yoga research. Colleague and friend, Grace Bullock comments upon the status of limited research recently here: [Link]